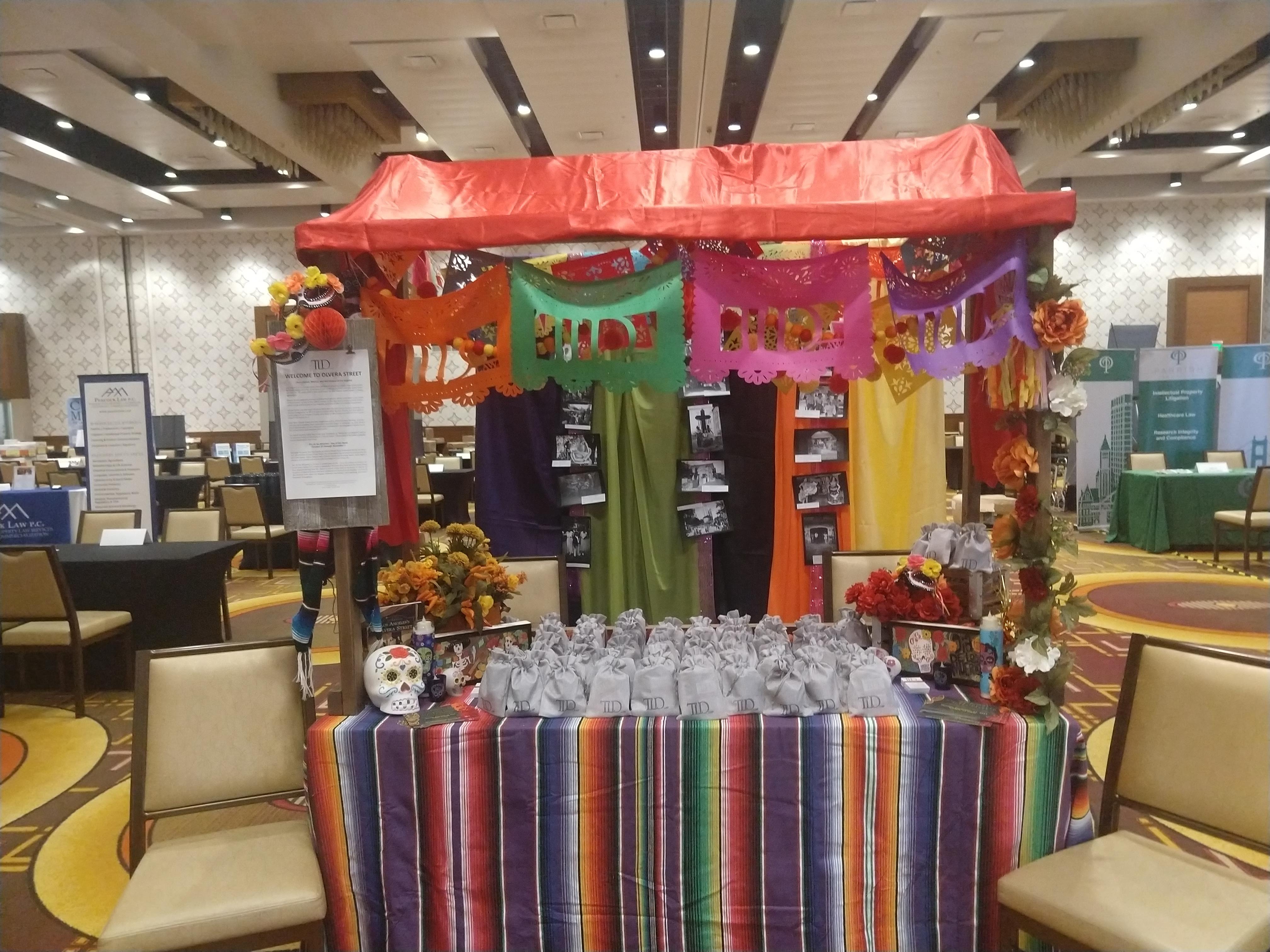 TLD Law, a member of NAMWOLF (National Association of Minority and Women Owned Law Firms) recently participated in the NAMWOLF Annual Meeting which was held in Los Angeles. There was an exhibit period during the meeting and TLD Law’s theme this year was “Dia de Los Muertos on Olvera Street”. There are a few reasons we decided to do this: First, September 15 through October 15 is Hispanic Heritage month, and Dia de los Muertos is celebrated October 25 through November 2. Our managing partner Roy Jimenez is Hispanic as are many other personnel of the firm. Second, the Hispanic culture is such a big part of the history of Los Angeles, we thought it would be great to highlight it. Third, Olvera Street, the birthplace of Hispanic culture in Los Angeles, is actually named after the first judge in Los Angeles County who held the first trials for the County out of his home on Olvera Street. In addition to that, our firm has a large estate & trust practice, so we deal with death a lot in the work that we do. Dia de Los Muertos is a holiday celebrated by those of a Mexican Heritage. In the Mexican culture death is not viewed as a sad event, but as a part of life. It is a day to celebrate the dead. Dealing with the death of a loved one is an extremely difficult but necessary part of life. Here at TLD Law we help our clients on a daily basis to get through the process of losing their loved ones. Here’s a bit more history of Olvera Street that we had up at our booth. Olvera Street, Mexico, and the History of Los Angeles Los Angeles as it is known today was officially founded by settlers from present-day Northern Mexico in 1781. It became a part of Mexico in 1821 and was under Mexican rule for 26 years until it was purchased by the United States under a Treaty agreement. Olvera Street (originally known as Wine/Vine Street) which is situated in the midst of Downtown, is one of the oldest streets in the city, and is home to Avila Adobe, which is the oldest house in Los Angeles, and one of the city’s oldest monuments. Olvera Street was the heart of ethnic life in the city and a place for new Mexican and Sicilian immigrants. In 1877 it was re-named after Agustin Olvera, the first superior court judge of Los Angeles County who lived on the street and held the first county trials in his home there. Over time Olvera Street became neglected and in 1926 Christine Sterling, a preservationist and wealthy, well-connected socialite began a campaign to save Olvera Street and remake it into a Mexican-style market place. She engaged prisoners to do the construction and oversaw their work. On Easter Sunday 1930, the street was reopened as “Paseo de Los Angeles” and as “A Mexican Street of Yesterday in a City of Today.” Olvera Street has been a popular tourist destination ever since. Dia de los Muertos – Day of the Dead October 25 through November 2 For over 30 years, the merchants on Olvera Street have celebrated Dia de los Muertos, also known as Day of the Dead. The celebration has evolved to incorporate the pre-Columbian, Aztec, Mayan and Catholic rituals surrounding death. Each night, a vibrant and colorful procession sets the stage for our ceremony. Dia de los Muertos is, in fact, a celebration of life – it is not a time to mourn our loved ones, rather it is a time to remember the lives they lead and the many things they enjoyed during that life. Death is a part of life, and so we honor it. Dia de los Muertos at Olvera Street is the only celebration of its kind in Los Angeles – A nine (9) day festival, with altars on display, children’s workshops, face painting, and entertainment throughout. “Out of the hearts of the Mexican people is spun the gold of romance and contentment. No sweeter, finer people live on this earth than the men and women of Mexico.” – Christine Sterling, Easter Sunday, April 20, 1930