Are Contractual Obligations Excused Due to COVID-19? 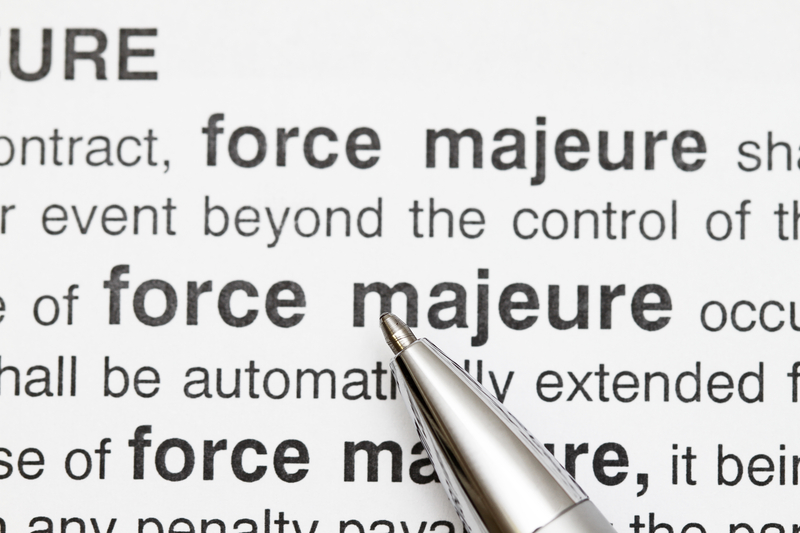 March 25, 2020 By: Cindy Boun, Esq. & Tyler Franklin, Esq. With the ongoing pandemic and numerous government restrictions, including “stay-at-home” orders, the impact of COVID-19 has been an unprecedented event in modern history.  Faced with changing economic circumstances, businesses and consumers alike are revisiting their contractual obligations, from plane tickets to purchase orders, to determine to what extent, if any, their contracts may be revised, delayed, or otherwise cancelled.  Do recent events related to COVID-19 excuse you from performing under a contract?  As it turns out, a number of key legal defenses may support cancelling or delaying contractual performance under these extraordinary circumstances. Force Majeure (“Superior Force”) Does your contract (including, but not limited to, leases, construction contracts, or manufacturing contracts) contain a force majeure provision?  Generally, a force majeure provision allocates risk among the parties to a contract upon the occurrence of specified circumstances or events (for example, war, labor strikes, supply shortages, acts of God, etc.), which the parties implicitly recognize will materially affect their agreement.  A simple force majeure provision might appear as follows: In the event either party is unable to perform its obligations under the terms of this Agreement because of acts of God, labor strikes, equipment failure, or other causes reasonably beyond its control, such party shall not be liable for damages to the other for any damages resulting from such failure to perform or otherwise from such causes. Depending on the specific language of your contract, you may be relieved of your contractual duty to perform.  Even where a contract does not include a force majeure provision, however, the additional legal defenses of impossibility/impracticability and frustration of purpose may be available. Impossibility/Impracticability. Generally, the defense of impossibility/impracticability may excuse contractual performance when performance becomes impossible or extremely and unreasonably expensive or burdensome as a result of unforeseen circumstances or events outside of the control of the parties.  Short of these extraordinary conditions, however, mere inconvenience or increased costs are insufficient to justify non-performance.  Moreover, performance may be merely delayed and not entirely excused where the relevant impossibility/impracticability is only temporary, delayed performance is not materially more burdensome, and the temporary impossibility/impracticability does not become permanent. For instance, in 1955, the City of Los Angeles was excused from performance under a contract with the City of Vernon regarding the its development and maintenance of sewage lines for the joint use of both cities when, years after the agreement was made, construction of sewage processing plants and facilities became necessary due to sewage dumping injunctions, resulting in unanticipated and unreasonably excessive costs to the City of Los Angeles. (City of Vernon v. City of Los Angeles (1955) 45 Cal.2d 710.) Frustration of Purpose. Performance may also be excused where unforeseen circumstances or events outside of the control of the parties, the non-occurrence of which was a basic assumption of the contract, cause a party’s principal purpose under a contract to be substantially frustrated.  Unlike the impossibility/impracticability, in the case of frustration of purpose, performance remains possible but the anticipated value of the performance to the party seeking to be excused has been defeated or destroyed. For example, frustration of purpose excused a hotel company from its contractual obligation to pay a country club monthly fees for golf privileges for its guests where its hotel subsequently burned down. (La Cumbre Golf & Country Club v. Santa Barbara Hotel Co. (1928) 205 Cal. 422.)  The California Supreme Court found that the contract between the parties was entered into upon the basic assumption that guests would continue to occupy the hotel, and that this assumption was no longer met through no fault of either party as a result of the hotel fire, rendering performance under the contract excused. (Ibid. at p. 425.)  Depending on the circumstances, similar conditions may exist in connection with present contracts and the impact of COVID-19. Foreseeability. A critical question in evaluating both of these defenses is whether the supervening event (in this case COVID-19) was reasonably foreseeable or otherwise contemplated by the parties at the time the contract was signed.  If the spread and impact of COVID-19 was not reasonably foreseeable at the time of entering into the contract, performance may be excused if the conditions of the above discussed defenses are met.  If, on the other hand, the spread and impact of COVID-19 was foreseeable, performance may not be excused under these defenses.  Timing is critical.  For contracts entered into prior to December 2019, when COVID-19 was first identified as a novel virus, it would be difficult to argue that the current pandemic or its consequences were foreseeable.  For contracts entered into after December 2019, however, there may be more room for dispute. What do I do now? Does your contract include a force majeure provision?  If so, what does it say?  Has performance under your contract become impossible or extremely, unreasonably expensive and difficult because of government-mandated business closures, stay-at-home orders, supply chain disruptions, or the life? Or has performance become only slightly more expensive or burdensome?  Is the timing of performance material to the contract, such that a mere postponement of performance would be insufficient?  If the parties are still able to perform, has the purpose or expected value of the contract been destroyed by recent events and circumstances? Did you enter into your contract before December 2019, when COVID-19 was first identified as a novel virus, or sometime thereafter?  Depending on the answers to these questions, you might be excused from your contractual obligations, either temporarily or permanently. Before refusing to perform under contract, however, it is critical that you have your contract and circumstances reviewed by an attorney.  Specific contractual language and the circumstances and assumptions on which a contract was made can make a significant difference in the obligations and liabilities of the parties.  For more information, contact our team of experts at Tredway, Lumsdaine & Doyle LLP.  We are ready to help!